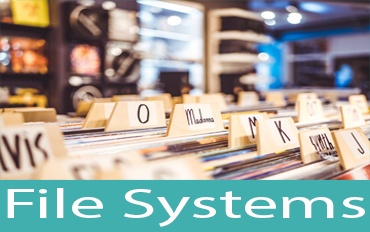 Computer File Systems
A computer file system is a way that manages how and where data on a storage disk(hard disk drive) is stored, accessed and managed.File system provides the capability to create, modify, and delete files, etc.

File Allocation Table (FAT) file system is a simple file system. FAT is usually for small disks and simple directory structures, because of FAT system we can locate data oh hard disk and if FAT lost then we cannot locate data on hard disk.

FAT32 allows more efficient use of hard drive space and allowed for partitions up to 8GB using 4KB cluster sizes, hence we can say that FAT32 uses smaller cluster.FAT 32 is in support of disk of 2TB (2048GB) at most, but it is not in support of partitions less than 512MB.

NTFS (New Technology File System) introduced with the Windows NT operating system in 1993, allowed ACL-based permission control.
NTFS is the standard file system of all version of Windows systems like NT, 2000, XP,  7 etc. NTFS is a good replacement of FAT file system .It is reliability and it have good utilization ratio of disk space. It also provides  access control list (ACL) and file system journaling.

Some of feature of NTFS are long file name, data protection and recovery, implements security and storing files in large hard disk and multiple hard disks.

There are other members in the extended file system family which is used for linux system: