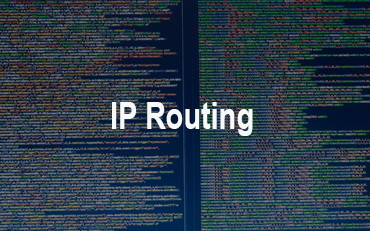 IP routing is a process of sending packets from one network to another network or fron one host  to another host in different network.

For Path determination router needs to do the following :
Know the destination address
Identify the sources it can learn from
Discover the possible ways
Select the best path
Maintain and verify routing information

It is configured for unknown destination
Generally used in the internet where destination are unknown
Configured at end point
It is the last preferred routing.

Admin distance (AD) is a value from 0 to 255
0 is more trusted and
255 means no traffic will pass with this route.

1) Distance Vector Protocol find a best path to a remote network by judging distance.
Its is Classful routing protocol.

Best route is nothing but the route with least number of hope.
e.g. RIP, IGRP

2) Link State Protocol also called open shortest path first, each routers create 3 separate tables. One of the tables keeps track of directly connected neighbours and the next one determines the topology of router and entire Network and last one is used as a routing table.
e.g OSPF

Matric : Identify the number of hope to the destination. A single hope refer to the number of local network and the packet must move through.

a) The Core layer : The core layer is main part of network,it transfer very heavy traffic in a short time.It is high speed router and switches.

b) The Distribution layer : It is a communication channel between the access and the core layer. It managed Routing, filtering, and QoS policies . It is smartest layer.

Segmenting a network using a Router

Multicast is the term used to describe communication where a piece of information is sent from one or more points to a set of other points.

What is Administrative Distance ?

Admin distance (AD) is a value from 0 to 255
0 is more trusted and
255 means no traffic will pass with this route.