microprocessor (or processor) also called as brain of computer system. It is an electronic component which controls the working of all the hardware and software. A processor responsible for performing arithmetical, input/output (I/O), logical and other basic instructions . It perform execution of  software commands and performs calculation functions.

Block Diagram of a Basic Microprocessor 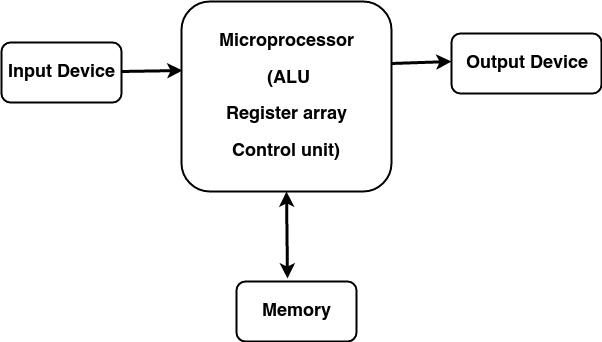 Basically microprocessor do follows a sequence which is Fetch, Decode, and then Execute.

The microprocessor fetches instructions from the memory, then decodes it and executes it, then it sends the result  to the output unit.

The CPU exchanges data with memory. For this purpose, it typically makes use of two internal CPU registers:
(1) MAR (Memory Address Register), which specifies the address for next read or write memory.
(2) MBR (Memory Buffer Register), it is used to store the data received from memory.
I/O address register (1/OAR) specifies a particular I/O device. An I/O buffer register is used for the exchange of data between an I/O module and the CPU.
A memory module consists of a set of module, defined by sequentially numbered addresses. Each location contains a binary number that can be interpreted as either an instruction or data.
An I/O module transfers data from external devices to CPU and memory and vice versa. It contains internal buffers for temporarily holding this data until it can be sent on. 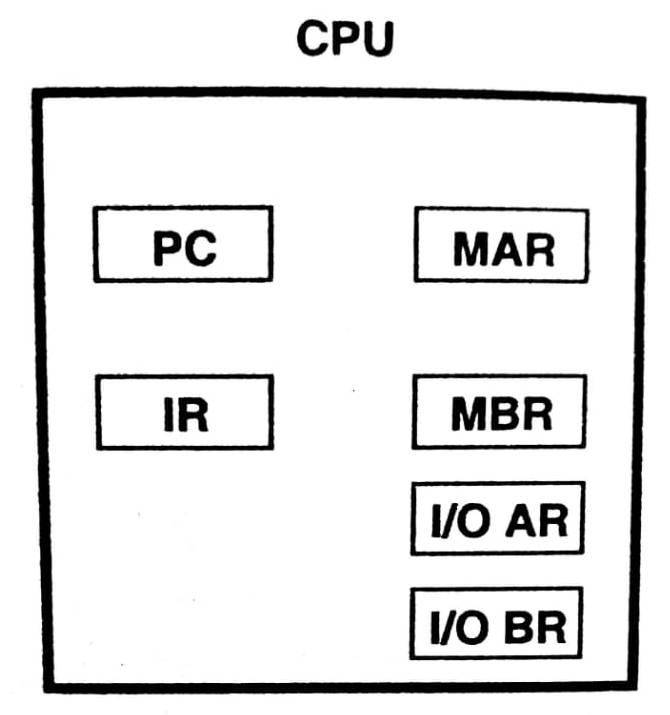 Some terminology used in a Microprocessor

Instruction Set : It is the set of instructions that the microprocessor fetches and execute.

Bandwidth : It is the amount of bits(data) processed in a single instruction in a fixed amount of time.

Clock Speed : It is the number of operations per second .It is also known as Clock Rate. It is expressed in megahertz (MHz) or gigahertz (GHz).

Features of a Microprocessor

Cost-effective: The microprocessor chips are available at low prices .

Size: It is of small size chip.

Reliability: It is reliable as the failure rate of microprocessor chips is very low.

A microprocessor can be classified into three categories:

Special Processors
Now some special purpose processor is as follow,

Coprocessor
A coprocessor is a processor which works side-by-side with the main processor , its used to supplement the processing power of a microprocessor many times its faster than the ordinary microprocessor.
Example : Math coprocessor performs mathematical computations.

Input/Output Processor
This microprocessor have a local memory of its own, which is used to handle only input output processes for a computer.
Example :
Keyboard/mouse controller
DMA (direct Memory Access) controller

A transputer is a first general purpose microprocessor which used in parallel computing systems.Its name is a concatenation of transistor and computer.

DSP (Digital Signal Processor)
This processor  process the analog signals into a digital form.  Analog to Digital Converters (ADC) and Digital to Analog Converters (DAC) are essential components of DSP.

Then Celeron processor, which has a speed of 266 MHz.
In 2003, Intel inaugurated the Pentium M.
The Pentium M is slower, at 900 MHz, so that energy consumption is reduced and the battery of the laptop lasts longer.
In 2006, Intel introduced the Core processor which has a speed of 1.6 GHz. It has more than one core, like in the case of Core Duo (which has two cores) and has virtualization capability which allows multiple copies of an operating system to be run on the same computer.

While Intel is the leading company in the manufacturing of processors, there are other companies such as AMD that make processors too. In 1991, AMD had brought out the Am386 processor and its speed is 40 MHz. It is compatible with the Intel 386 processor.

In 1999, AMD introduced the Athlon processor which has a speed of 500 MHz. Athlon was a legitimate competitor to Intel Pentium III because it was faster. As a matter of fact, AMD Athlon was the first processor to reach the speed of 1 GHz.

1. It uses the sophisticated design principles found only on mainframe and super computer.
2. It is based on CISC (Complex Instruction Set Computers) design.As the uses of microprocessors have increases faster and very much complex, Intel has develop microprocessors one after another.

1. 8080-It is the first general-purpose microprocessor. It is an 8-bit machine, with an 8- bit data processor. It was used in the first personal computer, the Altair.
2.8086-It is more powerful, 16-bit machine with 16-bit data processor. It sported an instruction cache, that prefetches a few instructions before they are executed.
3. 80286 – It is an improvement of the 8086 helps in addressing a 16-MByte memory instead of just 1 MByte.
4.80386-It is 32-bit machine, first made by Intel. It possess the complexity and power of minicomputers and mainframes built just a few years earlier. It support multitasking i.e. it could run multiple programs at the same time.
5. 80486-It started the use of cache technology and instruction pipelining. It also gives us a built-in math coprocessor.

6.Pentium-Together with the Pentium, Intel begin the use of superscalar techniques, which permit multiple instructions to execute in parallel.
7. Pentium II– The Pentium II uses Intel MMX technology, which is designed mainly to process video, audio and graphics data efficiently
8. Pentium II The Pentium IlI uses additional floating-point instructions to support 3D graphics software.
9. Merced– It is a new processor, which begin the use of a 64-bit organization With the change in technology, Intel has build some new processors like pentium IV, Intel centrino, Dual core processor and so on.

1. It is first RISC bases system.
2. It one of the most powerful 2 best designed system.
3. Its architecture is direct descendant of the IBM 801

(1) In 1975 IBM designed first RISC based system IBM 801 The 801, was simply a prototype used to demonstrate design concepts.
(2) The success of the 801 project forces IBM to develop a commercial RISC workstation product, the RT PC. The RT PC, built in 1986, based on the architectural concepts of the 801
(3) In 1990, IBM generated a third system which built on the concept of the 801 and the RT PC. The IBM RISC System/6000 was a RISC- like superscalar machine published as a performance workstation. IBM refer to this as the POWER architecture.
IBM entered into an alliance with Motorola and Apple, which used the Motorola chip, the development of Macintosh computers. As a result a series of machines that implement the
PowerPC architecture.

The following are the main members of the PowerPC family: