The simultaneous transmission of several signals along a single without any loss of identity of an individual signal. The various signals are input to a multiplexer that is used to allocate a transmission path to the input according to a particular parameter of the signal (like Frequency, Time or Statistics).

The original signals are reconstructed at the receiver by a demultiplexer that is operated so as to synchronize with mutiplexer. The transmission path may use any suitable medium, such as wire, waveguide, glass fibers or radiowaves. The communication channel chosen is termed a multiplex channel.

Multiplex operation is done in three manners and they are

Like in telephone exchange, a multi  cable is used to packed many subscriber’s lines and near the subscriber’s premises, these are separated into individual streams.

Generally this method is used in base band transmission (for short distance).

In this type of communication, A bandwidth (which can be transmitted by communication channel) is divided into many smaller logical channel with each channel having a small bandwidth: In this method the individual carrier frequency is required for each modulating signal (like speech) and these carriers are modulated according to heir modulating signals.

In this method, the available time is divided into available input signals (i.e. quantum of time is allocated to each signal during a definite interval). It seems that all the message are sent in parallel but infect a sample of one message is transmitted within its allocated time and a sample of another message after that so all the samples are transmitted sequentially but very fast and all the samples of any one message is reassembled at receiving and so each user seems like all processes are done simultaneously

“Multiplexer means many sources (inputs) with one Destination (output) so it is used as a data selector circuit.”

When we have fed any two control bits like 00. So first AND gate is enable while all the other AND gates are disabled. So in this case only I0 is able to transmit the number at output. I0 is low then Y (output) is low & I0 is high then Y is high. This makes the output Y =l0

Now the only one AND gate is enabled (i.e. t makes the output with the help of input I0 ) and all the other gates are disabled (So their inputs have not any output) and all the outputs of all gates are ORED by an OR gate so we have only one output out of four inputs.

In multiplexer, At any time there are so many inputs but only one output. This concept is broadly utilized in the transmission of signals or in communications where so many signals are transmitted in the form of one signal while at other receiver end it is demultiplexed at (i.e. one input with so many output).

(1) It is used as a parallel to serial converter in serial communication.

Demultiplexer means only one source (input) with many destinations (outputs) so it is used as a data discriminator circuit.” It is a logic circuit of one input with many outputs& control signals decide that which one output will be enabled &which data bit is transmitted. 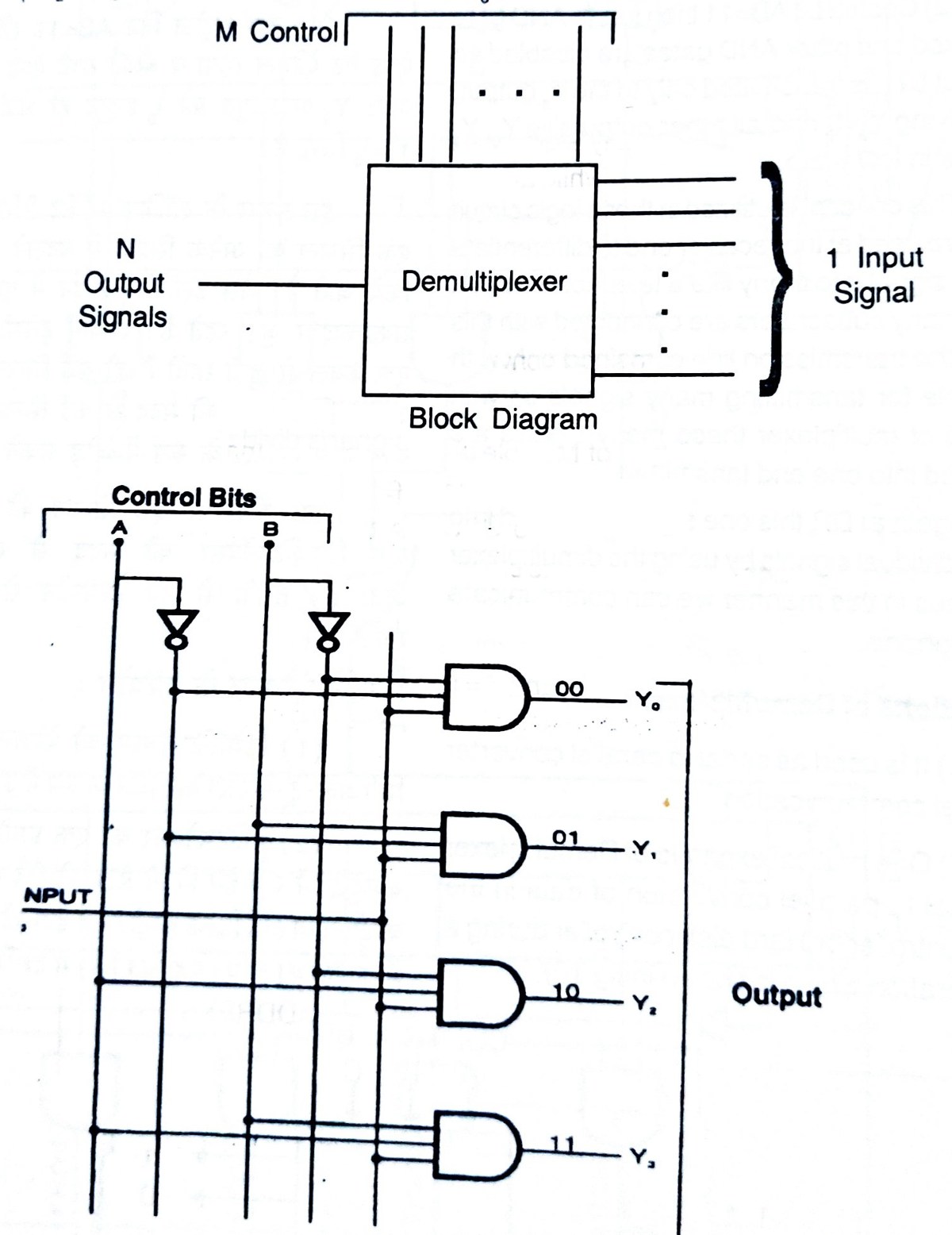 (1) Control bit AB=01 then the second AND gate is enabled and other AND gates are disabled so the input bit I0 is transmitted only to the Y, output, thus given Y1=I0

(2) Control bit AB-11 then fourth AND gate is enabled and other AND gates are disabled so the input bit I0 is transmitted only to the Y3 output. Thus giving Y3=I0 and all other output like  Y0 Y1 Y2 are in low state.

This concept is utilized in these logic circuit which are used at the receiver end to differentiate the one signal into many like a telephone line. At DP so many subscribers are connected with this DP but the transmission line contained only with one cable for transmitting many signals so with the help of multiplexer these many signals are converted into one and transmitted.

Again at DP, this one signal is divided into many individual signals by using the dimultiplexer circuit thus in this manner we can communicate with telephone.

(1) It is used as serial to parallel converter in parallel communication. 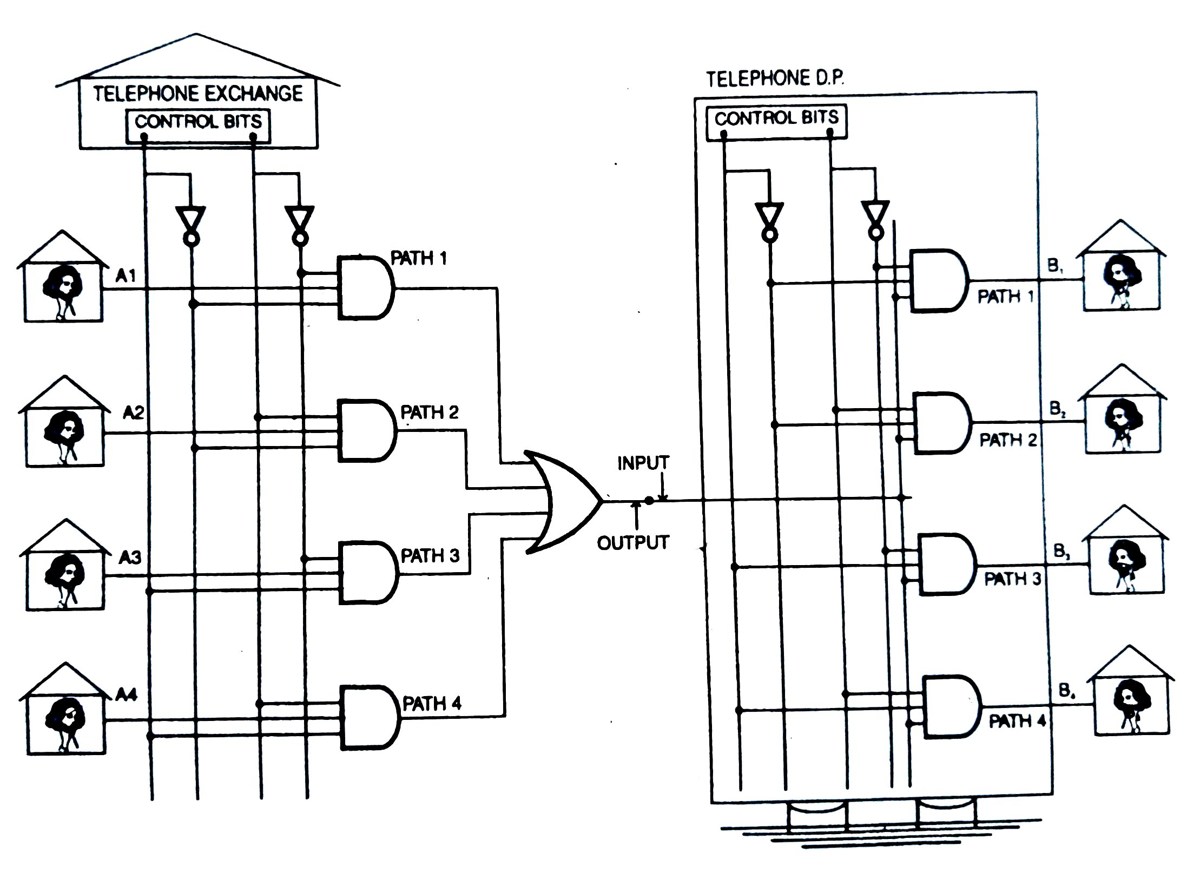 So for each input bit pattern, one output line is there, it is shown in Table.

(1) It is used as command decoder.

(2) It is used as a Port address decoder.

(3) ft is used as a Device number decoder. 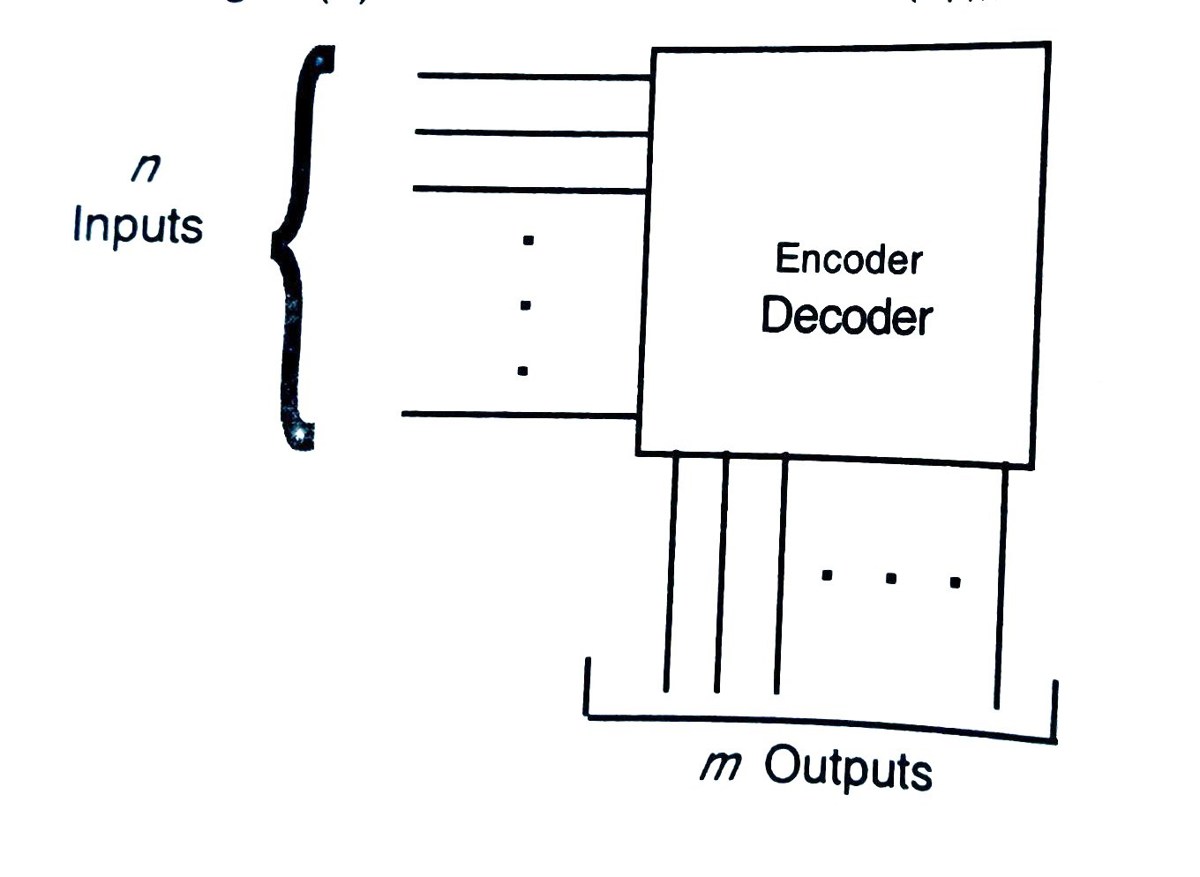 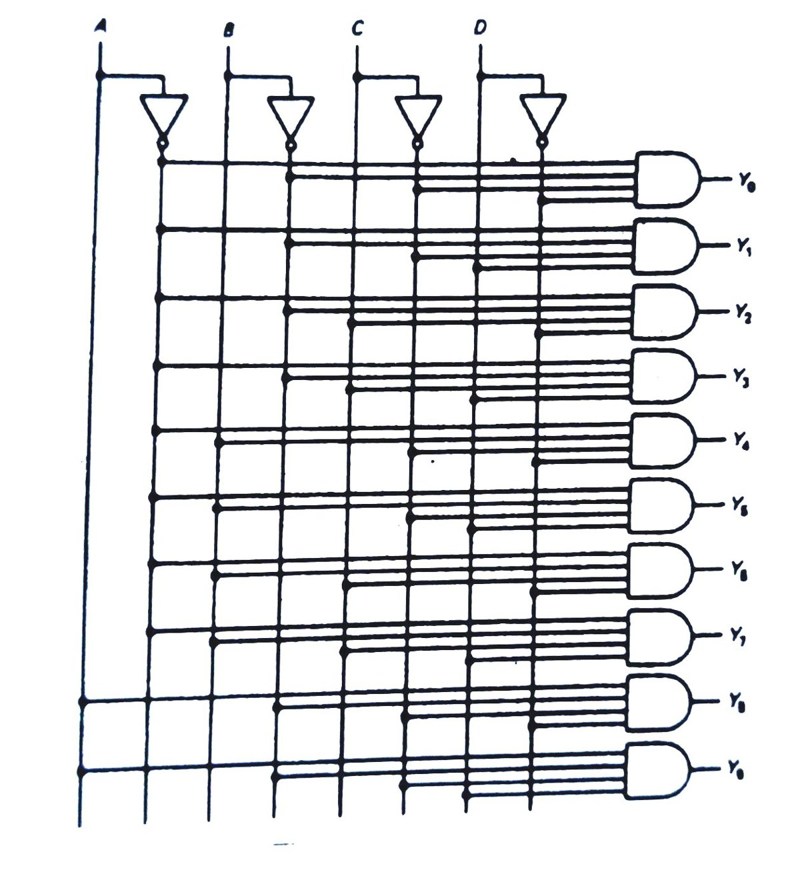 It is basically the reverse of a decoder so it has 2N inputs and N outputs. At a time only one of the input is active and this active input is recognized by a bit pattern on the output lines.

(1) It is used to identify the active device signal out of multiple devices/signals.

(2) Practically it is used as a keyboard encoder where a key has been pressed and generate a corresponding bit code. A very similar example is shown in figure of Decimal to Binary encoder 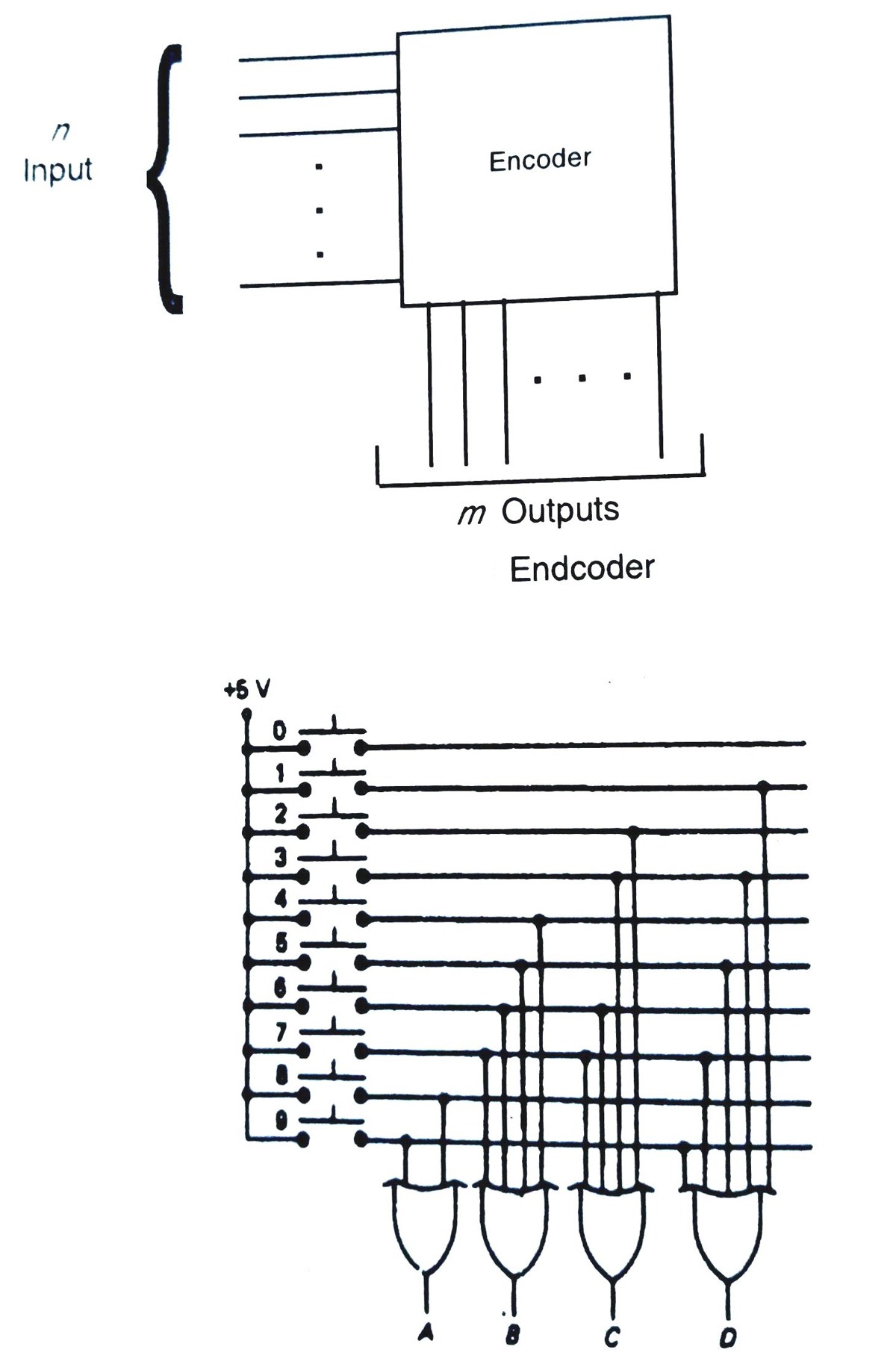