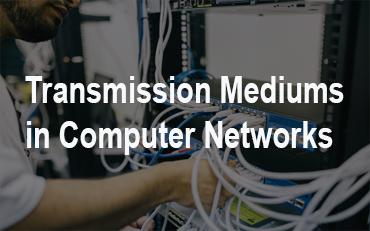 Transmission Mediums in Computer Networks are the physical pathways that connect computers, and other devices on a network.Each transmission medium requires specialized network hardware that has to be compatible with that medium.

A signal travelling along any of these media is directed and contained by the physical limits of the medium.Popular bound transmission media in use are twisted pair cable, co-axial cable and fiber optical cable.It can be classified depending  its own characteristics that is cost, transmission speed,  physical appearance etc.

Some of factors to be consider in data transmission

A twisted pair cable helps to reduce crosstalk and electromagnetic induction this is because it is made of two twisted copper wires twisted . Out of these two wires, only one carries actual signal and another is used for ground reference.
Some important points :
Its frequency range is 0 to 3.5 kHz.
Typical attenuation is 0.2 dB/Km @ 1kHz.
Typical delay is 50 µs/km.
Repeater spacing is 2km.

STP cables comes with twisted wire pair covered in metal foil. This makes it more indifferent to noise and crosstalk.
UTP cables has seven categories, each suitable for specific use. In computer networks, Cat-5, Cat-5e, and Cat-6 cables are mostly used. UTP cables are connected by RJ45 connectors.

Coaxial cable has two wires of copper. The core wire lies in the center and it is made of solid conductor.The core is enclosed in an insulating sheath.The second wire is wrapped around over the sheath and that too in turn encased by insulator sheath.This all is covered by plastic cover.
Here the most common coaxial standards.

Each cable defined by an RG rating is adapted for a specialized function, as shown in the table below:

The below figure shows 3 popular types of these connectors: the BNC Connector, the BNC T connector and the BNC terminator.

There are two types of Coaxial cables :

1. BaseBand
This is a 50 ohm (Ω) coaxial cable which is used for digital transmission. It is mostly used for LAN’s. Baseband transmits a single signal at a time with very high speed. The major drawback is that it needs amplification after every 1000 feet.

Signal is transmitted by use of light through the glass fiber.From one end of it light is emitted, it travels through it and at the other end light detector detects light stream and converts it to electric data. It provides an electrical isolation and totally reduces electromagnetic interference or noise by surrounding equipment. installing and connecting the fibers requires special equipment. The transmission rate can exceed 2 G bps, nowdays around 6 ~8G bps and is the highest transmission medium in the world.
Fiber Optic provides the highest mode of speed. It comes in two modes, one is single mode fiber and second is multimode fiber. Single mode fiber can carry a single ray of light whereas multimode is capable of carrying multiple beams of light.

The below figure shows how a ray of light changes direction when going from a more dense to a less dense substance.

Internal view of an Optical fibre

Unguided signals can travel from the source to the destination in several ways: Gound propagation, Sky propagation and Line-of-sight propagation as shown in below figure.

Ground Propagation : In this, radio waves travel through the lowest portion of the atmosphere, hugging the Earth. These low-frequency signals emanate in all directions from the transmitting antenna and follow the curvature of the planet.
Sky Propagation : In this, higher-frequency radio waves radiate upward into the ionosphere where they are reflected back to Earth. This type of transmission allows for greater distances with lower output power.
Line-of-sight Propagation : in this type, very high-frequency signals are transmitted in straight lines directly from antenna to antenna.

Electromagnetic waves ranging in frequencies between 3 KHz and 1 GHz are normally called radio waves
Radio waves are omnidirectional. When an antenna transmits radio waves, they are propagated in all directions. The omnidirectional property has disadvantage, too. The radio waves transmitted by one antenna are susceptible to interference by another antenna that may send signal suing the same frequency or band.
Radio waves, particularly with those of low and medium frequencies, can penetrate walls.  It is an advantage because, an AM radio can receive signals inside a building. It is a disadvantage because we cannot isolate a communication to just inside or outside a building.

Applications of Radio Waves
The omnidirectional characteristics of radio waves make them useful for multicasting in which there is one sender but many receivers.
AM and FM radio, television, maritime radio, cordless phones, and paging are examples of multicasting.

Microwaves are very useful when unicast(one-to-one) communication is needed between the sender and the receiver. They are used in cellular phones, satellite networks and wireless LANs.
There are 2 types of Microwave Transmission :
1. Terrestrial Microwave
2. Satellite Microwave

Terrestrial Microwave
Terrestrial microwave use repeaters with antenna for increasing the signal  distance .The signal received by an antenna can be converted into transmittable form and relayed to next antenna. It is an example of telephone systems all over the world

Satellite Microwave
This is a microwave relay station which is placed in outer space.
Signal is transmitted up and down between ground stations. The satellite is therefore used as a repeater for re-generating the signal.
These are positioned 36000 Km above the equator with an orbit speed that exactly matches the rotation speed of the earth. This is usually done to allow ground stations to aim antenna at a fixed point in the sky.Satellite manufacturing cost is very high .Transmission highly depends on whether conditions, it can go down in bad weather

Infrared Waves
Infrared waves, with frequencies from 300 GHz to 400 THz, can be used for short-range communication. Infrared waves, with high frequencies, cannot penetrate walls. This prevents interference between one system and with another system.
It is a region of the electromagnetic radiation spectrum where wavelengths range from about 700 nanometers (nm) to 1 millimeter (mm). Infrared waves are longer than those of visible light, but shorter than those of radio waves.
Remote controls use near-infrared light, transmitted with light-emitting diodes (LEDs), to send focused signals to home-entertainment devices, such as televisions. Infrared light is also used in fiber optic cables to transmit data.