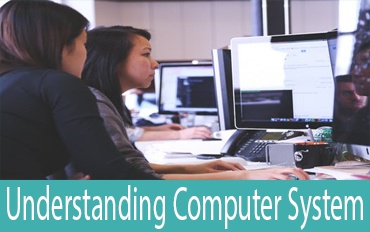 What is Computer System ?

A computer system is a set of integrated devices which takes input, process it and give output. Also it store data and information.computer system allows users to input, manipulate and store data. Computer systems include a CPU, monitor, keyboard, mouse and other optional components.

Definition : Computer is an electronic device that takes data as an input  and processes it under the control of a set of instructions (called program) and then produces a result (output), and all the set is called as computer system. 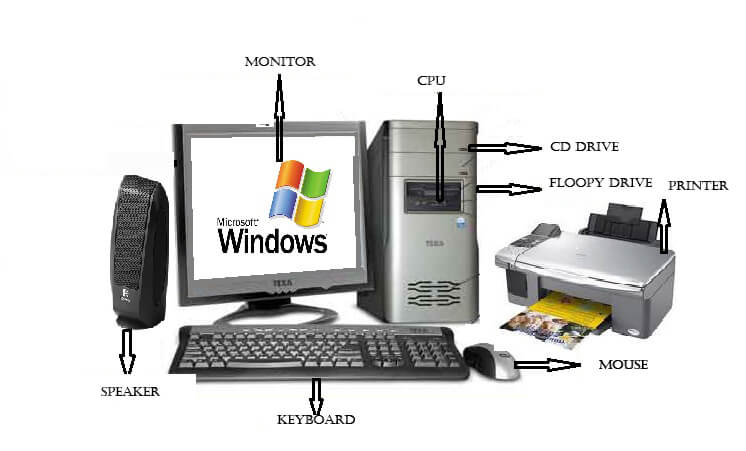 Components of a computer system

Memory :  It is used to store data and programs.It may be temporary or permanent
e.g RAM,ROM

Input device  :  Any device that sends data to a computer is called input device.
e.g keyboard and mouse

Output device :  Any device  that outputs information or  data from a computer to another device is called output device.
e.g display screen, printer

The Basic components of computer system are given below : 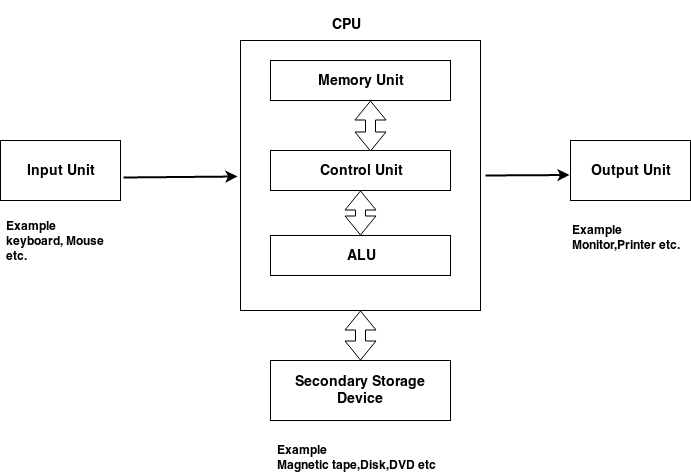 This is main Part of computer system, Is also known as processor and consist of three units which is as follow ,

i) Control Unit ( C U) :It controls all other units in the computer. The control unit     instructs the input unit, where to store the data after receiving it from the user. A control unit (CU) handles all processor control signals, control unit directs the entire  computer system its also communicate with both the arithmetic logic unit  (ALU) and main memory.The control Unit or CU Controls or coordinates all activities performed in a computer system.

ii) Arithmetic logic Unit ( A L U)  : All calculations are performed in the Arithmetic Logic Unit (ALU) of the computer. It also does comparison and takes decision.
Arithmetic operation comprises of (Addition, subtraction, division, multiplication) and the logical unit carries out the operation such (AND, OR, Equal, less than, greater then).
Data is transferred to ALU from storage unit when required. Whenever calculations are required, the control unit transfers the data from storage unit to ALU once the computations are done, the results are transferred to the storage unit by the control unit and then it is send to the output unit for displaying results.

iii) Main Memory unit ( M M U) : The main memory unit is used for storage of the copy of the main software program that controls the general operation of the computer.
and temporary storage of a copy of application program instruction, to be received by CPU for interpretation and processing or execution.

According to size, operational and processing power computer is classified into different types.

ii) Digital Computers:
These types of computer uses 0 and 1 for data processing where 0 is for ON and 1 is OFF,it use digital circuits and are designed to operate.Digital computer is programmable. Digital computers are suitable for complex computation and have higher processing speeds.

iii) Hybrid Computers:
It is combination of both digital and analog computers. In this type of computers, the digital segments perform process control by conversion of analog signals to digital ones.

Computer system types according to size and processing power.

i) Microcomputers:
These computer uses microprocessor and its central processing unit. Thses are smaller in size as compare to mainframe computer. It is also called as personal computer ,it use keyboard and mouse as input device and monitor or screen as output device also computer memory in the form of RAM and a power supply . These computers can fit on desks or tables

Personal computers :
It is small in size, single-user computer, based on a microprocessor. A personal computer has a keyboard for entering data, a monitor for displaying information, and a storage device for saving data.
Example : desktops, laptops,Notebooks,Tablet and Personal Digital Assistants (PDAs).

iii) Super Mini Computer
These are 32 bit word length machines and support memory sizes in the range 1 M byte to 8 M bytes. The CPU speeds is nearly 2 million instructions per second. A wide range of fast peripherals are supported by these machines. Its application area is research and development, process control bigger commercial organisation.


iv) Mainframe Computers:
It is powerful multi-user computer which is capable of supporting 100 to 1000 or more of users simultaneously. Mainframe computer are used by large organization for processing bulk data and ERP or highly critical application.

v) Supercomputers:
An extremely fast computer that can perform hundreds of millions of instructions per second, it is basically used by scientist or researchers.
Its has parallel processing and well-designed memory hierarchy and large transaction processing powers its used for study of Quantum physics, mechanics, weather forecasting, molecular theory.

There are five generation of computer each generation is separated by technology used by them (hardware and software).

Second Generation (1956 to 1963):
It used Transistors it is smaller and faster then second generation.It used magnetic tapes and magnetic disks for
secondary storage. For input it use punched cards and the output using
printouts

Third Generation (1964 to 1971):
It use Integrated Circuits (IC).Keyboard and monitor were used in this generation.

Examples The Intel 4004 chip was the first microprocessor.. In 1984, Apple introduced the
Macintosh.